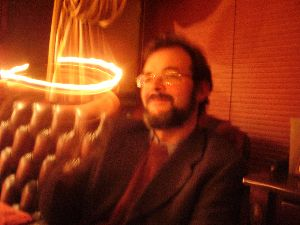 Username
des
Mitglied seit
26.05.2010
Letzter Login
01.06.2022
Letzter Upload
16.04.2020
Letzte Aktivität
01.06.2022
Werke
334
Kommentare
1599
Bewertungen
847
Ansichten fremder Werke
19702
Webseite
desinagrafix.ie
Ort
Limerick
Klassifizierung
Hobbyzeichner/in
Nutzer-Typ
Künstler
Über mich
Chuang Tzu said "The fish trap exists because of the fish. Once you've gotten the fish you can forget the trap. The rabbit snare exists because of the rabbit. Once you've gotten the rabbit, you can forget the snare. Words exist because of meaning. Once you've gotten the meaning, you can forget the words. Where can I find a man who has forgotten words so I can talk with him?" This was clearly a man who understood the Soul of Ronan Keating, or who had been smoking something very herbal very recently.

As of November '09, I am now no longer holding down what passes for a "real" job with a well-known computer company since our jobs have now "migrated" to Poland. I'm not too sure what my future holds but I do hope it will somehow include artwork I can tackle with my limited skill set.

I paint signs, murals, windows for Christmas or football or rugby matches, design posters, draw pictures and cartoons for anyone who'll pay me, and I doodle for personal pleasure.
I've been writing and drawing for years n years n years, but I still can't write or draw for nuts. Howsever, I love the process, and I get by well enough to fool some of the people most of the time.

I tend to dodge the whole art materials thing - I use biro, pencil, crayons, markers,wall paint, A4 paper, timber and walls. I work fast on my paintings and murals, and don't like doing preliminary drawings unless really pushed for one.

Excuse the photos and pics in the albums. They're the best I've been able to dig out of the chaos I call my filing system. When I grow up, I want to learn how to draw proper.

Steve Gerber, Frank Miller, Alan Moore, - Stan Lee back in the day, along with Kirby, Steranko, Moench, Don McGregor, anybody who can craft stories like Powers, or 100 Bullets, Neil Gaiman, Terry Pratchett, Don McLeod, Iain M. Banks, P.G. Wodehouse, Rex Stout, Garth Ennis....damn I hate these questions because I always leave someone out